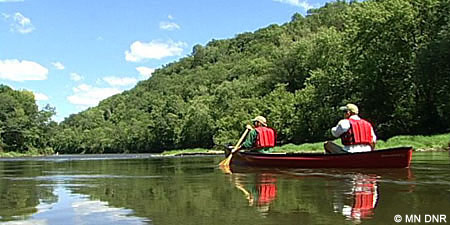 Water characteristics – check the river level report. Stream flow usually peaks in late April and falls throughout the summer. The river’s flow is affected by the regulation of reservoirs on tributaries, particularly the Whiteface and Cloquet rivers. From U.S. Highway 53 to Cloquet the river falls 136 feet, an average of 1.5 feet per mile. The river varies in width from 75 to 600 feet.

Landscape – Parts of the St. Louis are wild; other are dotted with farms, homes or small towns. Cloquet is the most developed area. Though bluffs and wooded hills are common in the upper reaches, the middle section of river is flanked by low-lying woods and bogs. The watershed is bordered to the north by middle Precambrian ores of the Mesabi Iron Range. Underlying the St. Louis itself are mid-Precambrian argillite and graywacke. In its middle reaches the St. Louis flows across silts and clays that once formed the nearly level bed of glacial Lake Upham.

Fish and wildlife – Walleye and northern pike are the principle game fish, though smallmouth bass are common from the mouth of the Whiteface River to Cloquet, and channel catfish from Floodwood to Brookston.

The Minnesota Department of Health has guidelines for consuming fish taken from Minnesota’s lakes and rivers. Go to the Fish Consumtion Advisory Page to find out more.

Cultural Information – For centuries before Europeans came to the St. Louis River basin, the area was the home of Woodland Culture Indians (Dakota tribes in historical times). Probably the first white man to explore this area was Daniel Greysolon, Sieur du Lhut, who traveled here in 1679 and for whom Duluth later was named. The St. Louis River linked Lake Superior with trading posts on the Mississippi River and Vermilion Lake. White settlement of the area began with the La Pointe Treaty of 1854. Increasing settlement and the construction of the Northern Pacific Railroad westward to the Red River valley required huge quantities of timber, much of which was cut in the St. Louis River valley. Iron mining on the Vermilion and Mesabi ranges further increased the demand for lumber and rail transportation. Many settlements along the St. Louis River, including Brookston, Forbes, Paupores, Peary and Zim, began as railway villages.

Water characteristics – check the river level reports.Because of the many steep, rocky stretches and the small watershed area, medium to heavy stream flow is necessary for an enjoyable run. During the summer, the river’s rapids may be runnable only after a heavy rain. Stream flow usually peaks in late April and falls throughout the summer. Fall rains frequently raise the level of the river significantly.

If the gauge on the bridge south of Brimson (river mile 67.7) reads much below 3.5, many of the rapids will be too rocky to run. Likewise, if the flow into Island Lake is less than 150 cubic feet per second, many chutes may be too congested for easy passage.

Landscape – The upper stretch of the Cloquet River is wild, its generally low banks are heavily forested with red and white pine, fir, spruce, aspen and birch. Long placid stretches are broken by short bouldery rapids. Outcrops are most frequent in a short stretch immediately above Island Lake. Except for several houses near Alden Lake and on Island Lake, the upper Cloquet is undeveloped. The lower part of the river varies in scenery. A riverside forest of red and white pine, fir, spruce, aspen and birch is occasionally broken by farmland and a few homes and cabins. Though several bridges cross this stretch, there are no large towns or cities.

The Minnesota Department of Health has guidelines for consuming fish taken from Minnesota’s lakes and rivers. Go to the Fish Consumption Advisory Page to find out more.

Cultural Information – The map of Major Stephen Long’s expedition in 1823 shows the Cloquet as Rapid River, but on Joseph Nicollet’s 1843 map, the river was called Cloquet, probably for a French trader. For centuries before the coming of whites, this area was the home of Dakota Indian tribes. In 1679 the first European to explore this area probably was Daniel Greysolon, Sieur du Lhut, for whom Duluth was later named. White settlement of the area began with the La Pointe Treaty of 1854, by which the Lake Superior and Mississippi bands of the Ojibwe Indians ceded to the United States the vast area of northeastern Minnesota. The completion of the railroad from the Twin Cities to Duluth in 1869 marked the real beginning of immigration to this area. Hundreds of immigrants from the eastern United States and Europe arrived in Duluth each month. There were an estimated eight billion board feet of pine in the Cloquet River valley. It was in this area that the largest section of timber ever recorded was cut–33 million board feet from a square mile near Little Alden Lake. Nearly all of the original pine stands had been logged by the time of the last log drive in 1925, though scattered mature white and red pine remain amid a second-growth forest of birch, aspen, fir and spruce.