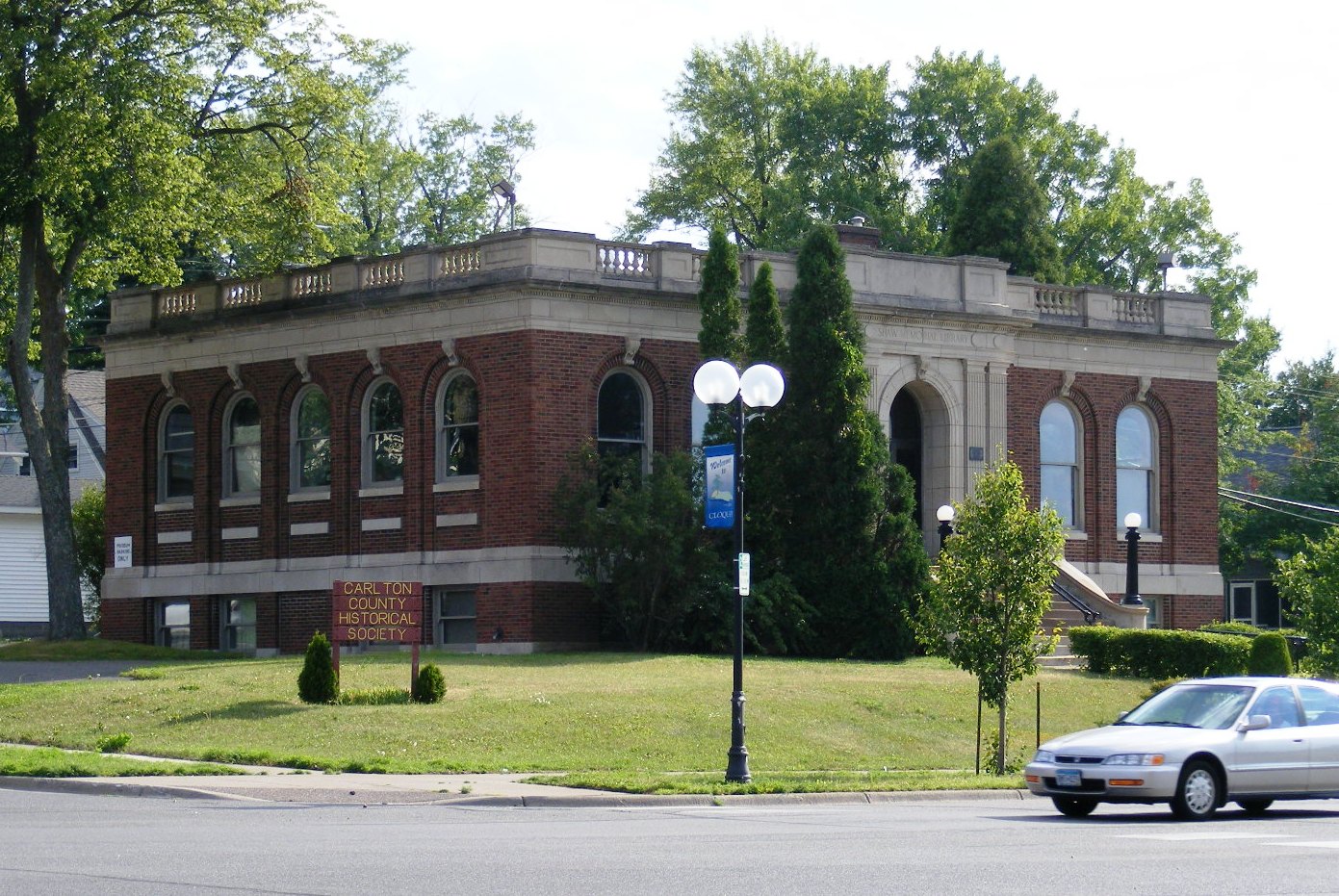 allowed for the rapid growth of the timber industries and agriculture which form the base of the economic life of the area. The railroads have been largely replaced by a road system which includes a section of US I-35 which cuts across the county north and south.

The early building of the village that became Cloquet started in the form of several little settlements clustered around three early sawmills. These settlements were referred to locally as ³Shaw Town,² ³Nelson Town,² and later ³Johnson Town.² More properly the whole settlement took its name from the most notable landmark in the region, Knife Falls, where the water flowed over sharp slate rocks that cut the moccasins of the voyagers.

The frontier site was platted in 1883, and in the following year, the three settlements were incorporated into the village of Cloquet. In 1904, Cloquet became a city with a mayor and common council form of government. The first mayor was Stokes Wilson. Many of the workers in the early industries and farming were immigrants from over a dozen European countries and Canada which, when mixed with the strong native culture, provided the rich cultural heritage still enjoyed by succeeding generations.

With the sawmills, paper company, and railroads in operation by the turn of the 20th century, Cloquet grew quickly. By 1890 the population was 2,530 and within two decades it had grown to 7,031. Hotels, boarding houses, stores, saloons, and specialty shops sprung up. The city enjoyed a lively social and cultural life. Early celebrations were marked by parades and sporting events‹including log rolling, baseball, and other activities in Pinehurst Park. Much of the early social life of the city centered around the churches and various ethnic organizations, but there were theaters, the Nelson Opera House, a YMCA, and a city band. The city library was formed in 1896.

No account of the history of Carlton County would be complete without mention of the devastating forest fires which occurred on October 12, 1918, and destroyed six towns and villages including Moose Lake and Cloquet. Over 550 people lost their lives in the fires. The City of Cloquet was almost completely burned only to rise again from the ashes in a changed, and in many ways, stronger community. Rebuilding took the courage and perseverance of the people of the county who reestablished the agricultural and industrial base of the county¹s economy.

The Cloquet Historic Sign and Outdoor Mural Projects of 2004 celebrate the history of the city with illustrated markers at a number of landmarks that are on the National Register of Historic Places and with colorful murals depicting historical scenes.The Carlton County Historical Society has collected and preserved the history of Carlton County since 1949. The Society operates a museum and research facility in the Carlton County History and Heritage Center at 406 Cloquet Avenue. For more information about the Society, call 218/879-1938, e-mail [email protected], or visit the web site.

A Short History of Carlton County and the City of Cloquet

The St. Louis River has played an important role in the history of the City of Cloquet and Carlton County. The St. Louis and other county rivers were important waterways for early native people (first the Dakota and later the Ojibwe) and supported a whole industry during the time of the fur trade beginning in the mid 1700s. Later the rivers served as the lifelines of the lumber industry which began in the county in the 1870s. The City of Cloquet grew on the banks of the St. Louis and the river continues to be a centerpiece for recreation, as well as vitally important to the city’s industry.

White settlement of the county began after the Ojibwe ceded the land of the area in the Treaty of 1854. Construction was begun on the Military Road which eventually connected Point Douglas, Minnesota (near St. Paul) with Superior, Wisconsin. The road passed through Carlton County and provided for mail delivery and passenger service. The coming of railroads to the county after 1870