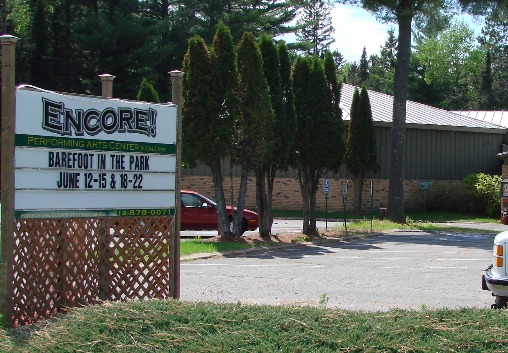 The Encore Performing Arts Center and Gallery has been the home of the County Seat Theater Company since 2008.

Seating 135 patrons on raised seating, there is not a bad seat in the house. Enjoy local art in the gallery and a glass of wine before the show. This is Community Theater at its BEST!

It was October, 1987, a fledgling community theater was a Carlton High School Band Booster fund raiser. It was a unique idea, “Let’s put on a play!” After six weeks of rehearsal for Neil Simon’s, The Odd Couple, the parking lot was filled, the show opened, and the laughs came. After three years of being a school project, it was time to become a theater group with our own identity.

The County Seat Theater Company was born. Continuing to perform, still using the high school facility for 13 years. During those years the season grew to include Children’s Theater, holiday and summer shows, in addition to the established fall production. In September of 1999 the theater

group performed its first production in a little church in the country in the Atkinson Township. The owner’s generosity allowed us to move in and give this little church a try. It was small, but it had immense charm and atmosphere. In January of 2001, we were able to purchase the little church, and it became The Old Country Church Theater.

Nine successful and incredible seasons later, County Seat Theater Company was experiencing “growing pains”. Crowding and accessibility issues were forcing us to begin thinking about plans to possibly add on to the old church.

In 2007, it was discovered that a building in Cloquet, MN, had a very large “For Sale” sign in front of it. The location was perfect, the size was great, the condition was excellent. Our very optimistic Board of Directors made the decision to at least try to become the new owners of this great new space. After a six month, very aggressive capital campaign, our patrons made it possible for us to make a nice sized down payment on the building and even have enough to begin renovations. We took procession in January, 2008, began major renovations and produced our first show, the big musical Sweet Charity, by April in our new home, the Encore! Performing Arts Center and Gallery.

The County Seat Theater Company has been producing top notch theater in Carlton County since 1987, progressing to a national award winning community theater! The Arts Center includes a space for local artists to showcase their work and provides the community with a full season of plays, concerts and events. We are a major arts presence and remain as the only full-season theater in all of Carlton County.

In 2012, County Seat Theater Company was invited to perform at the World’s Festival of Children’s Performing Arts in Toyama, Japan representing the United States. Also during that year they hired a full time general manager to run the day to day operations and continue to grow and keep the theater strong.

From the first show to the last, the County Seat Theater Company has set a standard of high artistic quality. This dedication to quality is what keeps the lights on and the doors open. The sky is the limit. Of course, we continue to have new dreams and goals. With continued support, we intend to entertain our audiences, challenge our artists and just keep growing.